This past winter I traveled half way around the world to spend time with my husband who works in Saudi Arabia. I left a list of local barefoot trimmers with my clients in case of an emergency or if any were in need of trimming while I was gone. With the exception of a few horses that had health issues going on, I felt that all would be well. One of those horses was Matthew. Mid-November Matthew, was having trouble eating and drinking and had a very sore neck. He was taken to a vet clinic where they performed dental work and sent him home. A few days later, he was still very sore in the neck, had laminitis and was displaying colic like symptoms. He returned to the vet and spent eighteen days being treated for laminitis. Although Matthew's owner, Linda, preferred barefoot, the vet felt traditional farrier methods were the best course of action for the laminitis. A type of wooden wedge block was screwed to his hooves in hopes of alleviating his discomfort. As days went by, his blood panels continued in a downward spiral indicating that his kidneys and liver were shutting down. Matthew was in constant pain from the laminitis and showed no sign of improvement. Unfortunately as I was leaving the country, Linda called to tell me her horse was being sent home from the vet clinic to die.

When I returned home at the end of January, I fully expected Matthew to have gone on to greener pastures but much to my surprise he was still alive. When he returned from the clinic it looked hopeless at first but Linda felt she had to give her boy a chance because of his will to live. It was very challenging to keep him warm on the below zero degree days and nights – most of the time he laid in his stall. Finally he started showing improvement and new blood panels showed his kidneys and liver were normal. As Linda's wish was to return Matthew to barefoot, the vet agreed to begin by pulling the hind shoes. 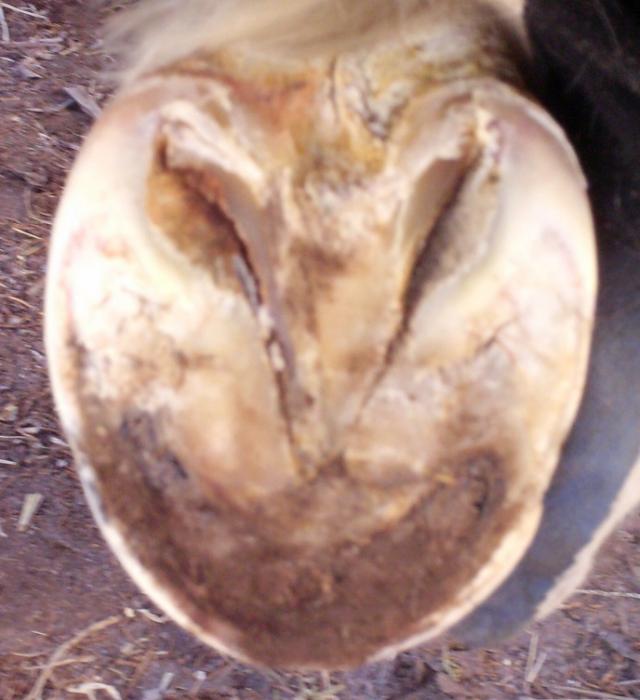 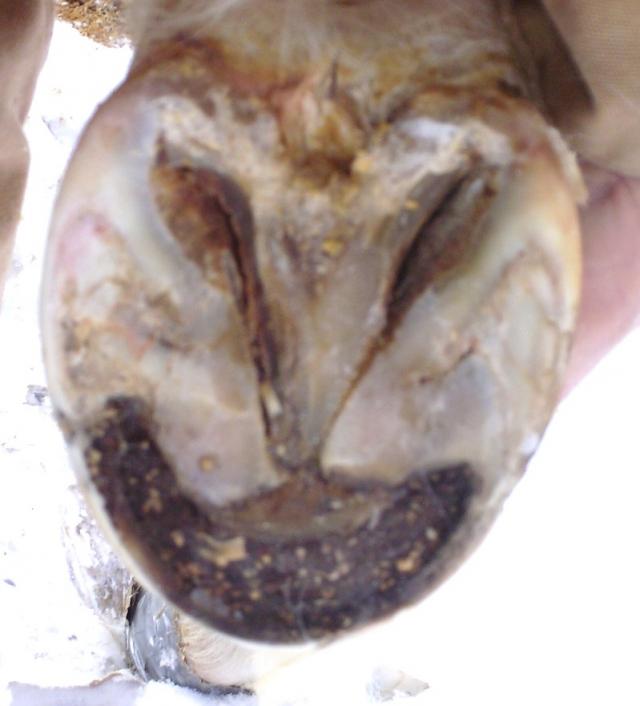 When I arrived at the barn, Linda had Matthew standing ready for his trim. As I removed his bandages, nothing prepared me for the sight of the sole completely gone from the tip of the frog forward. To say I was shocked was an understatement. I wished someone would have warned me before I started the process out in the middle of a dirt lane by the barn. But there I was, so I began lowering the heels and bringing back the toe to a more proper break over. By the time I finished trimming, Matthew seemed more comfortable and was walking better. After cleaning the dirt from his hooves, we put him in some Easyboot Gloves with 12 mm medium density comfort pads inside until we could come up with a better solution. 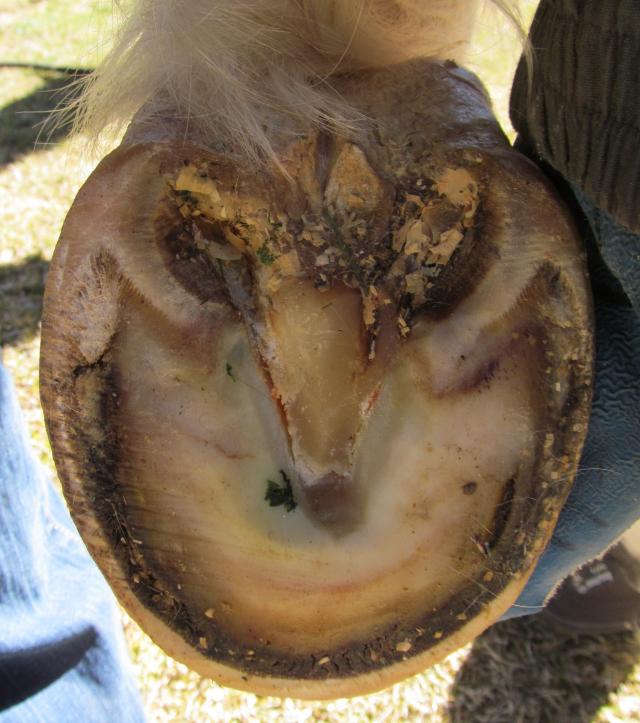 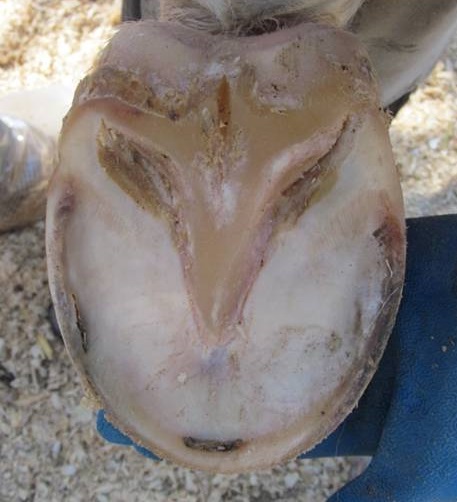 The next day I called EasyCare for advice on boots and padding for his severe condition. I ordered the Easyboot Rx and several pairs of pads knowing that we would have to experiment to find the perfect combination. As barefoot trimmers will tell you, the horse will show you if you just take the time to ask. Taping the pads to his hooves with duct tape worked best at first (Matthew preferred 2 soft density comfort pads). Boots were tolerated during the day as he roamed the yard but not at night. We ran into a problem with rubbing even with wool socks. So the taped on pads offered a needed rest from the boots while he was in his stall on softer terrain. In as little as five weeks, you can see how quickly the sole filled back in and the hoof began to heal a condition that was traditionally thought irreparable. I'm hoping that in the future, veterinarians will come to know that with the proper tools available like hoof boots and pads, barefoot is a viable option for laminitis.