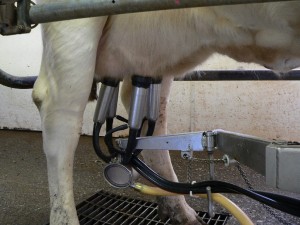 While walking, you notice a slight irritation and pain coming from your foot. It gradually gets worse and worse. Finally, you have to stop and remove a pebble from your shoe. Nothing else matters until you stop the pain.

You’ve just experienced, in a small way, the significant disruption that lameness can have on one of your milking cows. Some herds I’ve recently visited have had production and reproduction problems caused by foot problems. Dairy cattle with sore feet can result in costs of increased days open, vet fees, drugs, and involuntary culling.

However, you can reduce the impact of foot problems on your herd. Understanding lameness is the first step. There are three main types of causes: infectious, metabolic and environmental.

Foot rot is generally associated with wet, dirty conditions and rough surfaces. Bacteria enter through a crack in the skin or hoof and infect the leg. Classic symptoms are swelling of the leg above the claws and a cow in a lot of pain. There may be a crack in the skin and pus leaking out. If you really wanted to, you could smell the foot and detect an odour resembling Limburger cheese.

You can prevent or minimize foot rot by keeping the cows clean, dry and well bedded. Routine foot trimming and footbaths are also highly effective.

Usually antibiotics will clear up an infection. If you don’t treat the cow, her immune response system will generally overcome the bacteria and their toxins in about a week. However, some cases may deteriorate to severe, irreversible crippling.

Stable foot rot, or interdigital dermatitis, responds poorly to antibiotics. This ailment occurs in early lactation. It’s probably due to the stresses of calving and the changes in the weight distribution pattern on the claws of the rear limbs following calving. Cows with this infection may stand with their heels suspended over the manure gutter or limp noticeably. A white to gray pus, smelling like sour milk, may ooze out of the affected skin area. Footbaths, corrective foot trimming, topical dressings, footwraps and protective boots can help.

Strawberry foot, or digital dermatitis, has become fairly widespread in Ontario. Easily recognized as a reddened patch just above the cleft of the hoof, the disease causes a protrusion that looks like a strawberry. The lesion will progress until it has raised, conical projections with black papillae (hair-like objects) extending 10 to 15 centimetres from the surface (hairy wart stage). It’s very painful for the cow.

Treatment is a long and consistent process. While footbaths help, sprays and topical dressings are the most popular treatments in Ontario.

Spraying the infected foot daily for seven or eight days will usually start healing the hoof. Before spraying with the antibiotic, rinse or clean the manure and dirt away from the infection. This will allow better product contact with the skin.

One key to preventing infectious hoof diseases is proper hoof maintenance. The hoof tends to grow about five millimetres per month. Depending on the walking surface, the hoof will wear at varying rates. The toe tends to wear more slowly because it’s harder and the heel wears faster since the horn is softer.

The objective of hoof trimming is to distribute the weight evenly between the two claws of the foot, leaving sufficient horn to protect the corium or inner hoof, and to trim the claws to their normal size and shape. Thus the cow’s weight should be evenly distributed over all four feet.

Trimming heifers’ hooves about two months before calving helps set up the first lactation by shaping the claws. After this, most cows tend to need trimming twice a year. Logically, the cow should be trimmed at dry-off. Check at mid-lactation as well to see whether an extra trim is necessary. Problem cows will probably need to be trimmed even more than that.

Selecting genetically for sound-footed cows will reduce the number of cows prone to hoof problems.

You can avoid other sources of hoof problems through proper feed and environment management.

Laminitis is generally a symptom of rumen acidosis. It’s evidenced by inflammation of the foot, malformation of the claws with grooves and ridges, yellow waxy solar horn, ulcers and abscesses. Treatment involves corrective trimming and avoiding long periods on cement.

Making sure the environment is as clean and dry as possible will also promote healthy hooves. Removing or reducing abrasive surfaces reduces the opportunity for scratches, scrapes and cracks that allow infectious agents to invade the hoof.

Just as that pebble in your shoe irritates you until it’s removed, hoof problems create production problems with your cows. Keeping them walking healthily and smoothly is another link in the chain of efficient milk production.

This article first appeared in the January 2000 Ruminations column of the Ontario Milk Producer magazine.