We all know that being negative is considered a bad thing, and it's no different for the horse's hoof!

A negative palmar (front), or negative plantar (hind), angle in the hoof refers to the orientation of the coffin bone in the hoof. In a negative angled hoof, the wings of the coffin bone (called the palmar processes) are lower than the front of the coffin bone. A healthy hoof alignment within the capsule is considered to be a couple to several degrees positive. The range of normal can depend on the horse's individual conformation and breed. While there are proponents of a ground parallel coffin bone when the horse is at rest/standing on flat ground, it is generally accepted that the healthiest and soundest feet are those with a positive angle (this is my preference). As I am always repeating, the rear most area of the hoof is meant to be landed upon, and under full load it will dip downward as nature intended. If the hoof is already at ground parallel just standing still, the coffin bone will go negative under full impact. 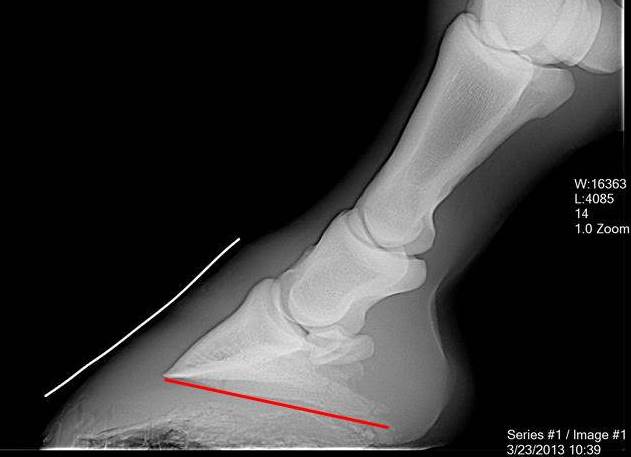 A negative plantar angle.  The red line shows the angle we are referring to – the rear
of the coffin bone is lower than the front. This is an extreme example to help you see it.

So what are the causes, why is it bad, how do you recognize it, can we fix it?

Some of the causes of negative palmar/plantar angles:

Why is being negative a bad thing?

The horse is essentially overloading the rear of the hoof. The soft tissues of the digital cushion, lateral cartilages, frog, etc., are being crushed. The heel bulb areas will look flattened, the frog can appear to be prolapsed, and there may be a crevice in the frog from where it is pinching forward (which can trap thrush). Horses with negative plantar angles often stand underneath themselves, which leads to soreness through the stifles, hocks, hamstrings and up into the croup and sacroiliac area.

How does one recognize this situation?

A lateral radiograph will certainly show you the bone orientation, and is ideal so you know exactly what you are dealing with. With that said, a big sign of NPAs can be a bullnosed appearance to the hoof wall. This is due to the wall following over the tip of the coffin bone which is pushing outward. Another obvious sign is from underneath the hoof, there will be more depth at the apex of the frog than the rear of the foot. Sometimes horses with NPA's will have wear such as squaring at the toe wall and a buffed appearance to the wall. (This is also a sign of sore hocks or stifles, which we know is a possible result of NPA's, but it can also be just a symptom of soreness, injury or weakness there and can't be assumed on its own to mean the horse has NPAs.) 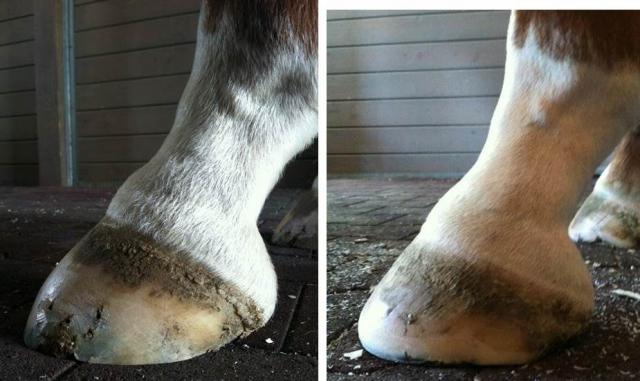 Before (left): The bullnosed or dubbed shape common in horses that have a NPA.
After (right): Five weeks later – the heel was able to start lifting now that the pressure has been relieved.

After all that lead up, it seems over simplified to say you usually just remove excess sole under the coffin bone…but that is usually all that is required!  It may take a single good trim to fix the situation and get the hooves back on track. Or, more commonly, it can take many trims with varying amounts of material taken out, and the horse may need some remedial body work to help soothe the sore soft tissues. It takes someone really good at reading the hoof to know how much to take and when. Hooves adapt over time, and the corium that covers the coffin bone can actually have distorted enough that a trimmer could get into trouble by trying to over correct a situation too quickly. Sometimes all we can do is lower the wall at the toe, and only the sole immediately adjacent to it. If the problem didn't originate in the hooves but rather from a conformational issue, disease or an injury, we are limited in how much permanent change we can make at the hoof.

At the AHA conference a couple of years ago, we used a simple heat sensing tool on the feet of horses that were NPA, before and after their trims. The feet were warmer after the trim, indicating possible better circulation in the foot when the rear of it was not being as crushed. I've seen some amazing changes to the heel and frog areas on horses with corrected angles so don't be negative, be positive! 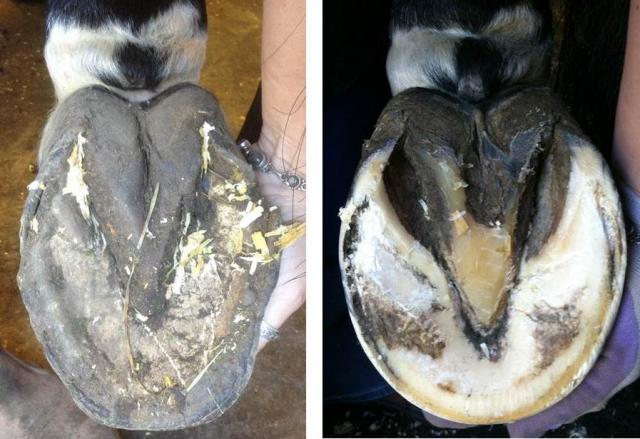 A sole view of what changes can take place when correcting a NPA. There is approximately
6 months time between the images. The weight bearing area of the heel has moved back
and thickened, the frogs have widened, the hoof is rounder in shape, and there is more
equal depth under the coffin bone.  (The horse is a working teenaged dressage horse.)